Blog post #1: Temples and How they Relate to Us 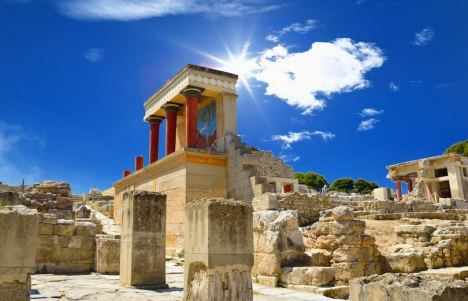 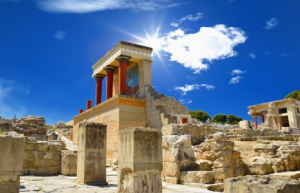 Located some 5 km (3 mi) south of Heraklion, the Palace of Knossos is the most  important and best known Minoan palace complex in Crete. The great palace  was built gradually between 1700 and 1400 BC, with periodic rebuildings after  destruction until it was devastated once and for all by fire. The palace comprised  living spaces, reception rooms, workshops, shrines and store rooms all built around a central square. The main function of the palace is still under debate. It  could have been used primarily as an administrative center, a religious center— or both, in a theocratic manner. Knossos is also often associated with the legend  of the Athenian hero Theseus killing the Minotaur 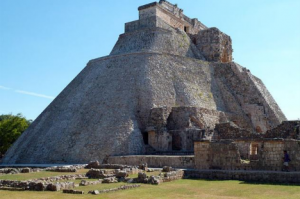 Uxmal, which means “built thrice,” is a destroyed Mayan city in Yucatan,  Mexico. It was declared a World Heritage Site by UNESCO in 1996. One of its  major landmarks is the “Pyramid of the Magician,” which is also called the  “House of the Dwarf” because of the belief that it was built by a dwarf who  hatched from an egg. According to legend, the dwarf grew into an adult in a  day and built the pyramid in a night. In reality, the pyramid was constructed in  the sixth century. 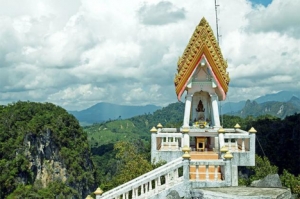 Wat Tham Suea is located in Thailand and was given the name “Tiger Cave  Temple” after the tiger’s paw prints that line the walls of the limestone cave in  which it was built. It’s considered a holy site by the Buddhists in Krabi,  Thailand. 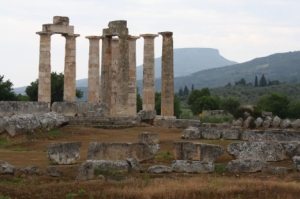 The temple of Zeus at Nemea was constructed in c. 330 BCE and replaced an earlier  temple which had stood from the 6th to 5th century BCE. Inside was a cult statue of the  god. The temple was composed of an exterior Doric peristyle (6×12 unusually tall and  slim columns) with an interior Corinthian colonnade, topped by a second story of the Ionic  order. There were no sculpted decorations on the exterior. It is regarded as the last of the  great Doric temples of the Classical tradition. The temple measures a little over 20×42 m,  the material used is locally quarried limestone. Three of the now standing columns have  stood since original construction (slightly darker colour), the others have been repositioned  in the early 2000’s CE using the original, fallen drums. Photo © Mark Cartwright. 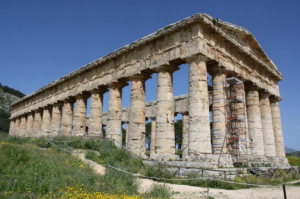 The temple of Poseidon was constructed in approx. 440 BCE, over the ruins of a temple  dating from the Archaic Period. It is perched above the sea at a height of almost 70 m. The  design of the temple is a typical hexastyle, i.e. it had a front portico with 6 columns. Only  some columns of the Sounion temple stand today, but intact it would have closely  resembled the contemporary and well-preserved temple of Hephaestus beneath  the Acropolis, which may have been designed by the same architect.

As with many Greek temples, the Poseidon building was rectangular with a colonnade on all  four sides. The total number of original columns was 36, of which 18 still stand today. They  were made of locally-quarried white marble. They were 6.10 m (20 ft) high, with a diameter  of 1 m (3.1 ft) at the base and 79 cm (31 inches) at the top. Photo © Mark Cartwright 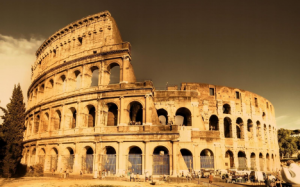 The Colosseum (/ˌkɒləˈsiːəm/ KOL-ə-SEE-əm; Italian: Colosseo [kolosˈsɛːo]) is an  oval amphitheatre in the centre of the city of Rome, Italy, just east of the Roman Forum and is the  largest ancient amphitheatre ever built, and is still the largest standing amphitheatre in the world  today, despite its age. Construction began under the emperor Vespasian (r. 69–79 AD) in 72[1] and  was completed in 80 AD under his successor and heir, Titus (r. 79–81).[2] Further modifications were  made during the reign of Domitian (r. 81–96).[3] The three emperors that were patrons of the work are  known as the Flavian dynasty, and the amphitheatre was named the Flavian  Amphitheatre (Latin: Amphitheatrum Flavium; Italian: Anfiteatro Flavio [aɱfiteˈaːtro ˈflaːvjo]) by  later classicists and archaeologists for its association with their family name (Flavius). 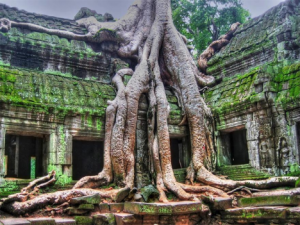 Angkor Wat is a temple complex, located in the Siem Reap Province, Cambodia.  It holds the record of being the largest religious monument in the world. The  best times to visit is between November to February. Note that this particular  part of the temple has been overtaken by a large tree.

There’s something about a temple… many think it’s just history but there is something  fascinating about temples.. They are held in reverence and sometimes even awe by  people all over the world. No matter which religion or culture they stem from or  wherever they are located on this planet, tourists spend millions of dollars every year  traveling to temples to learn about them, take pictures in front of them, and contemplate  the significance of past cultures.

Two thousand years ago a man by the name of Paul, a first century apostle and  theologian, said to the Corinthians whose culture was filled with temples, “Do you not  know you are a temple of God, and that the Spirit of God dwells within you? If any man destroys the temple of God, God will destroy him. (!) The temple of God is holy and that  is what you are.”

These are profound words and some people might not see the relevance to today,  but I personally believe they are still valid, especially for the believer in Christ. One of  the biggest disappointments about the church today is the lack of discipline. Somehow  Christians today do not see or understand that the word ‘discipline’ is intimately related  to the word ‘disciple’ , for you see, a disciple is a ‘disciplined one.’

So my friend, here is the moment of truth if I may- which of the temples above best  represents you?

Are you like the first temple pictured above, the Temple of Knossos? You look good  from a distance and even better with a fine coat of paint but once up close, there seems to be something truly lacking internally, in one way or another.

Or the Uxmal Temple at Yucatan? The apex or ‘head’ looks good but more than a  little structural ‘weight’ has been gained over the years.

The “Tiger Cave Temple” in Thailand is also centuries old but well- preserved- it may  be relatively small but impressive for its ‘longevity’. This may well represent the best of  the lot.

Zeus may have been famous in his day, but there is relatively little left of his temple this sadly seems to represent those who have endeavored to live off their popularity and  fame. Perhaps a little too much ‘partying’ has brought them to a point of being a mere  specter of their former selves?

The Doric Temple at Segesta seems to represent someone who needs constant  attention for the decay of the overall structure is both evident and imminent.

And my favorite, the Coliseum in Rome which may forever be immortalized not by  Roman gladiators who look like Russell Crowe hacking through each other’s armor as  much as Bruce Lee and Chuck Norris engaged in mortal martial arts combat over a the  title deed to a Chinese restaurant in downtown Rome! How solid is that ancient  structure though much has been lost, and truly it is more symbolic than of practical use,  the modern fencing at the base giving testimony to this fact.

Lastly, is your life overrun by cancer or diabetes or Alzheimer’s? How terrible if that  is the condition you are currently facing. Yet I want to tell you that if you are in this  condition, even now there may still be real hope for you! That we will discuss in  upcoming modules.

So gentleman approaching 50, or those who have crossed the proverbial 50-yard line  and heading down for the ‘big endzone’, which temple best describes you? One of the  seven featured here, or perhaps none? Or even better yet, if you could DRAW up a sketch of what you would like your temple to look like down here ‘before you go meet  Jesus’, what would it look like? Please feel free to share your ideas with me.

And as a word of encouragement, a summary of sorts- the Paul who told the  Corinthians that their bodies were temples of God’s Holy Spirit is the same Paul who  said to another group of believers in Ephesus: 5:11-17- paraphrased- ‘there is terrible  evil in the world- it is shameful to even talk about it but it needs to be exposed…we  need to Wake Up!’ vs 14-17

“For this reason it says, Awake sleeper,

And arise from the dead and Christ will shine on you.

Therefore, be careful how you walk, not as unwise men, but as wise,  Making the most of your time, because the days are evil.

So then do not be foolish but understand what the will of the Lord is.”

Dear friend, do you understand that God’s will for you, generally speaking, is that you  Be Healthy?! That He wants your temple-the ONLY one you will get prior to His Second  Coming- to be in solid shape until the day you leave this earth? That your temple,  generally speaking, does not need to be filled with pharmaceuticals- both legal and  illegal drugs- when in fact there are many natural ways to make your life and bodies  better? And this we will talk about soon in our next module.